Getting a full approval, including the property being purchase, will help in securing an offer!  With Sellers having the upper hand, a purchaser with a  non-condition or very limited conditions, will have more power when presenting an offer than other purchasers with conditions and possibly higher bids.

As a First Time Buyer, we can approve the purchaser and the property before an offer is presented, however, the buyer has to ensure that all key elements of the approval are done up front.  As a move up buyer, we can give  options if their current home does not sell or strategy to keep the current home as a rental investment.

With an aggressive market, all time low rates and home value increasing,  a Kitchener Waterloo Mortgage Broker can help guide you through the process and give you unexplored options  that will assist you in your first or next home purchase. 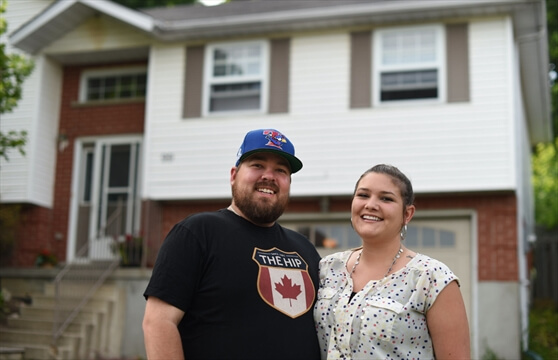 Both hailing from Hespeler, they’d focused their search in that area, and knew there wouldn’t be a lot of properties to choose from.

But they were quite flexible when it came to the type of home they were looking for, and felt positive when they learned there was only one other offer for the place they had in mind.

So it was a bitter pill to swallow when their realtor told them they’d lost out, a message they’d come to learn all too well.

They submitted offer after offer. They heard “Sorry” time and again.

One of the homes they bid on had 11 offers. In another case, their starting bid was $22,000 over asking and they still didn’t get it. Every listing they went for had multiple offers.

“The temptation was certainly there to go well above our means,” Alicia says.

They finally got the news they’d been hoping for on their seventh try.

“That was probably one of the happiest moments I’ve had in such a long time,” Alicia says. “We don’t have to play this game anymore.”

The couple moved into their new home in Hespeler earlier this year.

“I’m so, so thankful for the realtor (Lisa Harlock) we had,” Alicia says. “She was so incredibly understanding and compassionate.”

Alicia and Cody’s story is not an unfamiliar one these days, with strong demand and low residential inventories fuelling a sellers’ market in Waterloo Region.

“It’s my feeling that there has never been a better time to sell,” says Karlis Bite, president of the Cambridge Association of Realtors.

“The demand has not let up even despite the record low levels (of inventory),” he says. “Which indicates to me, basically, there’s a buyer for every house.”

There were just 500 active residential listings on the association’s Multiple Listing System at the end of May, down more than 43 per cent from a year earlier.

And slim demand is driving prices higher, to an average sale price of $377,779 for the Cambridge association in May, an increase of 12.6 per cent over last May.

It’s a similar situation throughout the rest of Waterloo Region. The average sale price in Kitchener and Waterloo in May increased 7.3 per cent year-over-year to $378,248, according to the Kitchener-Waterloo Association of Realtors.

There were 1,283 active residential listings on its Multiple Listing System at the end of May, about 26 per cent lower than this time last year.

“Traditionally, the spring market is strong anyway, and this one is no exception,” says Kitchener-Waterloo association president Charlotte Zawada.

“The listings aren’t sitting there very long,” she says. “Everything is moving very quickly.”

Multiple offers and bidding wars are becoming more and more common — though not to the extent in ultra hot markets such as Toronto and Vancouver, where soaring prices have attracted the attention of the federal government and the Bank of Canada.

“We’re not seeing quite the same level of craziness as, say, in the GTA or in Hamilton,” says Bite. Still, “it’s taking a bit of a toll on buyers.” 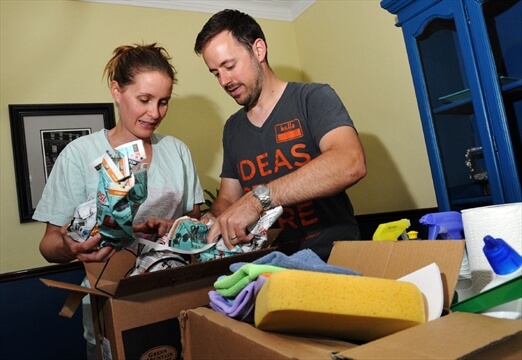 Their own house, just down the street, wasn’t even on the market. No matter, their realtor said.

They’d already done some renovations, and realtor Caroline Harvey was confident their Kitchener home wouldn’t last long once it was listed.

The couple learned on a long weekend that the home they liked was coming to the market.

They viewed it on a Tuesday, and submitted an offer the next day. It was accepted on the Thursday; their conditions cleared on Friday.

“It was a little bit of a high-stress roller-coaster,” says Eric.

Facing competition from at least one other bidder, they offered a little bit over the asking price.

“We found out we weren’t the highest offer that was submitted, but they wanted to sell to us,” Eric says.

When they listed their own house, it sold in a week. And although only one offer was formally submitted, Eric says eight other prospective buyers were waiting in the wings.

“It’s such a high-stakes game and it’s emotionally tough on people,” he says.

While the dearth of residential listings is unusual, it’s not unheard of.

The one category locally that’s seeing a plentiful supply, even a surplus, is homes in the $1 million and higher range, he says.

While it’s impossible to say for sure why we’ve been experiencing an overall shortage of homes for sale of late, those in the industry suggest a few factors are at play.

For one thing, many people thinking of selling would also be entering the market as buyers, competing for already-scarce listings.

“Sellers are more afraid of being able to find the right replacement property,” says Benninger. Some people may choose to hold off altogether for now.

If a homeowner has purchased or refinanced and is locked in to a low-rate mortgage, that’s another disincentive to sell, says Zawada.

Low rates are also making it possible for both parties to own a home in the event of a separation or divorce, meaning there are fewer forced sales these days, suggested Benninger. That wasn’t necessarily the case in the past.

And at a recent luncheon for local realtors, Canada Mortgage and Housing Corp. analyst Erica McLerie said many baby boomers are working later in life and simply aren’t moving yet.

On the demand side, higher prices may be keeping some first-time buyers from entering the resale market. But others looking for a home locally are facing mounting competition from out-of-towners attracted by properties that are still far more affordable than in the Toronto area.

While the average sale price of a single-detached home in the areas served by the Kitchener-Waterloo Association of Realtors was $438,708 in May, it hit a staggering average of $1.3 million in Toronto.

According to the Canada Mortgage and Housing Corp., real estate sales and prices are expected to remain strong in Ontario in 2016, with price hikes forecast to slow next year.

The tight resale market is benefiting new home sales, where prices are rising, too, but not at the same pace.

If you’re willing to brave the market as a buyer, the Cambridge Association of Realtors’ Bite says it’s imperative to have your financing in order.

In a multiple offer situation, there can be pressure on a buyer to remove conditions. Rather than forgoing a home inspection once an offer is submitted, for example, a buyer could schedule a second showing and bring an inspector with them before placing an offer, Bite suggests.

And although some people might balk at hiring a realtor and paying a hefty commission, it’s a wise investment in a hot market, says Eric Jardin.

“Everything went so smoothly with Caroline (Harvey, their sales representative),” he says. “I wouldn’t begrudge her a penny.”

So how much longer will the high demand, low supply conditions last?

It’s difficult to say with any certainty, but many in the business believe that the strong spring market will extend into the traditionally quieter summer months before calming down.

“Some things are all happening at the same time that … are creating that perfect real estate storm,” Zawada says. “It will be interesting to see what the latter half of the year produces.”

Benninger, a 38-year industry veteran, is confident conditions will stabilize before long.

“The nice part about our market that’s so different than the Toronto market or the Vancouver market — in all the years I’ve been in this business, we’re really steady as she goes.”

High demand, low supply makes for ‘stressful’ housing market2016-06-202020-06-19https://www.mortgagekw.com/wp-content/uploads/2018/01/logo-1.pngMortgage Centre KWhttps://www.mortgagekw.com/wp-content/uploads/2018/01/logo-1.png200px200px
About
mortgagecentrekw
Formed in 1989, The Mortgage Centre was Canada’s first national mortgage broker organization. As your local, licensed mortgage broker, The Mortgage Centre KW is fully-qualified to provide you with a range of unique benefits.