What are negative interest rates and could they affect me?

The prospect of negative interest rates may sound ominous for the Canadian economy, but some experts say the move wouldn’t signal fiscal doom – and everyday Canadians might barely notice the difference. 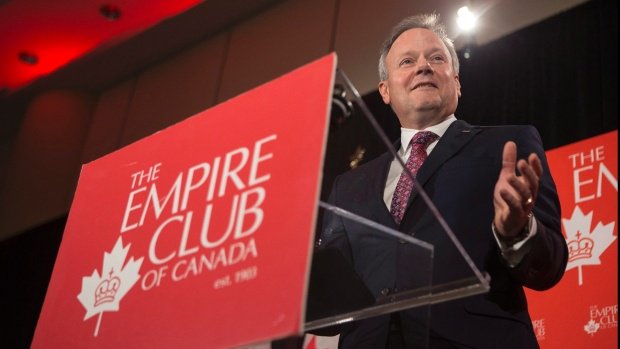 Bank of Canada governor Stephen Poloz speaks at the Empire Club of Canada in Toronto on Tuesday, Dec. 8, 2015. (Chris Young / THE CANADIAN PRESS)

Last week, the Bank of Canada said it would consider the unprecedented move of lowering its interest rates into sub-zero territory in case of an economic crisis.

The move would primarily influence Canadian banks that deposit money to the central bank and make interest off these transactions. Currently, the interest rate sits at 0.5 per cent, which is already considered quite low. Before 2008, interest rates hovered around 4 per cent.

If the BOC dropped its interest rates below zero, it would effectively reverse this transaction; rather than Canadian banks being rewarded for their BOC deposits, they’d be charged for them.

The logic behind the move is that banks would be encouraged to keep their money liquid by loaning it out and investing in the Canadian economy. Economists theorize that would spur economic activity when things begin to look grim.

Of course, BOC governor Stephen Poloz’s was commenting on a hypothetical scenario, and insisted that the central bank isn’t actively planning a negative interest rate.

And while the move would be unprecedented for Canada, European countries such as Sweden, Denmark and Switzerland have all dropped their interest rates below zero.

SHOULD CANADIANS BE WORRIED?

“I don’t think the average Canadian needs to worry about this,” Lovett-Reid said. “But I understand why they are. It’s uncomfortable.”

There’s no way to predict if or when rates could go negative, but Lovett-Reid says it’s “extremely unlikely” the BOC would make the move. And if interest rates were to move south, the news wouldn’t come out of left field.

“The bank has other options that they would certainly deploy before they would look to do this,” she said.

WOULD THIS MEAN HIGHER BANK FEES?

Banks understand that such a move would likely scare away customers (and their savings accounts) to competitors, Lovett-Reid says.

“The first thing people would do is take their money and put it under their mattress. Why would you leave it at the bank if you’re losing money? I don’t think we’re anywhere near that. I don’t think that’s their initial course of action.”

She adds that banks in countries with negative interest rates, such as Sweden, haven’t hiked up their service charges.

However, Lovett-Reid adds that there’s a chance that “larger commercial accounts” could be hit by an added cost of banking.

WOULD GETTING LOANS BE EASIER?

So if the central bank is hoping to encourage banks to help stimulate the economy, does that mean it’ll be easier to get a loan?

Probably not, according to Lovett-Reid.

“I wouldn’t say it’ll be necessarily easier, because the banks will want to ensure that you qualify and you’re a good lender. Banks will still have their criteria in place to make sure they’re qualified borrowers.”

Instead, she says banks will likely still exercise proper caution in the event of an economic doomsday.

“You can’t lend everything you have because in the event the economy turns… we want to make sure we still have the strength of our financial institutions in place.”

WOULD THIS AFFECT POTENTIAL HOMEBUYERS?

For Canadians looking to buy a home, negative interest rates likely wouldn’t have much effect on the purchase.

In fact, she says that encouraging Canadians to purchase new homes would benefit an economy with sub-zero interest rates.

“You’re going to want people to continue to buy homes, because when people buy homes, goods are consumed,” she said.

HOW ABOUT THE LOONIE?

If anything would suffer from negative interest rates, it’s the Canadian dollar.

Lovett-Reid says money is “mobile, sensitive and scared,” and that any weakness at the BOC could translate into fewer investors trusting Canadian banks with their cash.

“It would be additional pressure on the Canadian dollar,” she said. “People go where they get the biggest bang for their buck is … so people looking to make money on their money would go into the U.S. dollar.

Alas, all this speculation is likely for naught, Lovett-Reid says, as the Canadian economy anticipates growth.

It’s taken longer for the economy to “pass the baton” from the energy sector to manufacturing, but Canadian economists expect good news in the coming months, Lovett-Reid says.

According to Craig Alexander, vice president of economic analysis for a policy research institute C.D. Howe, Poloz was simply revealing emergency “ammunition” in the BOC’s arsenal of tools.

“It isn’t that they expect it to weaken, it isn’t that they’re planning on providing a lot more stimulus, but he basically wanted to lay out the fact that they do have options at their disposal,” he told CTV’s Power Play last week.

Alexander pointed out that negative interest rates have been utilized in Europe and that the United States, which has a relatively strong economy, has dabbled with quantitative easing, a similarly experimental fiscal move.

What are negative interest rates and could they affect me?2015-12-152020-06-19https://www.mortgagekw.com/wp-content/uploads/2018/01/logo-1.pngMortgage Centre KWhttps://www.mortgagekw.com/wp-content/uploads/2018/01/logo-1.png200px200px
About
mortgagecentrekw
Formed in 1989, The Mortgage Centre was Canada’s first national mortgage broker organization. As your local, licensed mortgage broker, The Mortgage Centre KW is fully-qualified to provide you with a range of unique benefits.