KITCHENER — Paul Singh’s North American Tech Tour rolled into town this week. It’s a one-man show in a pickup truck and Airstream trailer with enough street cred to have entrepreneurs lining up for face time. 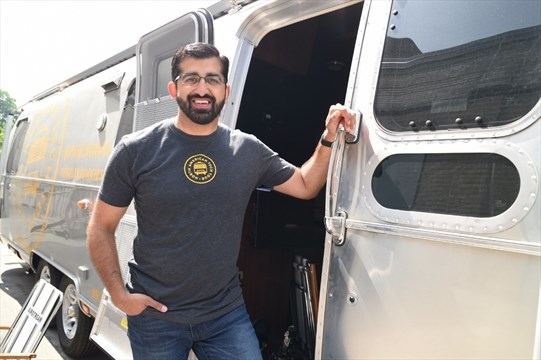 The veteran technology entrepreneur and investor, wealthy due to his investments in more than 1,600 startups in 50 countries, parked his truck and trailer beside the Tannery building in downtown Kitchener, and held meetings all week with startups, investors and tech executives.

Many of the meetings involved founders of startups in Rev, a program run by Communitech that provides intense training in sales and marketing. Singh was totally impressed.

“I am not trying to blow smoke at anybody and tell them they are really pretty or whatever, but I don’t think there is any program like it in North America, in a good way,” Singh said Friday. “It is arguably one of the most high-quality programs I have seen so far.”

Singh, a former partner in California-based 500 Startups (an incubator for early-stage companies), founder of venture fund Crystal Tech FunD, and founder or co-founder of several firms, now describes himself as chief hustler for Results Junkies, which publishes a weekly email featuring his thoughts on startups and venture capital.

This year, Singh is on a 34-city tour of North America — the North American Tech Tour — to visit incubators, accelerators, founders and investors. So far, he has logged more than 10,000 kilometres on the tour.

Kitchener was stop No. 12 on the tour. Like he does in each city he visits, Singh flew in investors from the United States who have worked with him in the past to meet with the startups he sees.

And after five days of meetings, Singh is thinking about making investments in two Kitchener startups. He will not say which ones until the due diligence is done, and the papers are signed.

With a neatly trimmed beard, black-framed glasses, and wearing jeans, running shoes and a T-shirt that says North American Tech Tour, Singh looks much like the young tech entrepreneurs he’s in town to meet and assess. He is sitting on a folding chair under the awning of his tricked-out Airstream.

The trailer has nine solar panels on the roof and a huge bank of lithium batteries under the floor. The battery bank shares space with a container holding one ton of water. The trailer has Wi-Fi, of course.

Singh explores the cities he visits on morning runs. After a run, he works out with kettle bells on the sidewalk beside his Airstream, chatting with passersby on the way to work. He also rides a motorized longboard around the city.

“This thing goes 24 kilometres an hour. It’s better than a bicycle,” Singh said.

Curious about the technology centres outside of Silicon Valley and New York, Singh decided to do his tour. He also wanted to slow down his pace of business, which normally includes flying 300,000 kilometres a year and touching down for 10-hour-long blitzes of meetings.

“Fundamentally, I am doing the same stuff I have been doing for the last couple of years, just at a much more comfortable pace, and I am able to make much more meaningful relationships, which I think is really neat,” Singh said.

His previous visits to Canada included only Toronto and Vancouver, where he invested in startups.

“I had heard of Waterloo, I just never came here,” Singh said. “I will say, six days into it, I get the appeal now. I get the appeal of why you would want to build a company and live in the Kitchener-Waterloo area. You’ve got way less traffic than Toronto, way more affordable housing and you’ve got very smart, ambitious people.”

Generally speaking, the tech sector here does not appreciate how highly regarded it is across North America and around the world, Singh said.

“One of the reasons I said that about Rev, that I have never seen anything like it, is that every company here has got revenue, meaningful revenue,” he said. “The beauty of it is you have great companies that are making money and creating jobs, so let’s not lose sight of that.”

Venture capital is changing, he said, and his truck-and-trailer tour is ahead of that curve.

Traditionally, a venture capitalist would raise money for a fund, say $50 million, and the investors expect to make four times their investment within eight to 10 years. The fund invests in several companies, say 10 startups.

The problem is nine out of 10 startups fail so the venture capitalists end up putting a lot of pressure on the successful one to make enough in order to pay back all of the investors in the fund, Singh said. “So the tail is wagging the dog.”

These days, Singh takes an entirely different approach. He sets up what is called a special purpose vehicle, which is like an investment fund for a single company. In technical terms, it is a limited liability corporation that invests in a single startup, or growing tech firm, he said.

Singh’s next stop on his tour is Fargo, N.D. After that, he heads to Kelowna, B.C.