In a banquet hall in north Toronto, a condominium-sales event is generating the kind of frenzy more often seen on a trading-room floor. 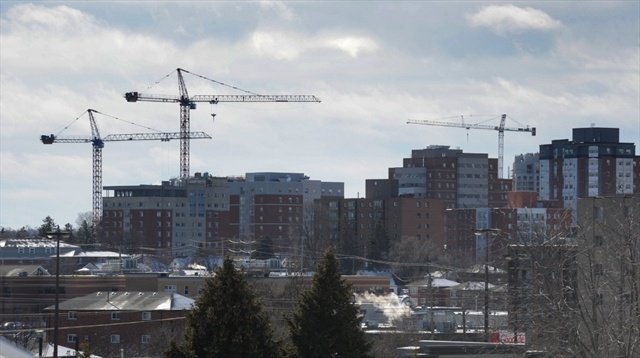 Michael Wekerle, former Bay Street trader, technology investor, Dragons’ Den judge and now real-estate mogul, steps up to a podium in front of about 1,600 people to make his pitch. Waterloo, with its two universities and a burgeoning technology sector that is home to big tech companies such as Google and a multitude of startups, is booming, he says.

“It’s a land grab,” Wekerle, 52, dressed in a light grey three-piece suit and trademark sunglasses, tells the rapt crowd last weekend. “There were zero cranes when I first showed up there and there are 15 cranes in the sky now.”

He finishes his speech. Then all hell breaks loose. Prospective real-estate investors surge to the back of the room, submitting paperwork for offers on one or more units as agents in suits shout and gesture to clients, who anxiously pace the aisles. Three hours later, the 250-unit, $85-million District Condos project at 151 King St. N. is sold out and 170 people are added to a waiting list.

The fervent demand for property in Waterloo highlights the city’s coming-of-age as an investment destination: first by technology companies and now real estate firms looking to gain from the city’s metamorphosis. Real estate investors at the event, including families, seasoned individuals and couples, were looking for higher returns than in Toronto, where homes are sold for almost double what they are in Waterloo.

“It’s what that fellow was talking about,” said Bill Ring, head of operations for a property management company, referring to Wekerle. “Students are coming in and need a place to live, tech companies are opening. It’ll all drive the value up.” Ring drove two hours to attend the event and buy a one-bedroom unit. It’s his first condo investment, which he intends to flip to another buyer before it’s completed, taking advantage of the advertised 40 per cent return. “I don’t want to invest in stocks because they’re crazy and real estate is a solid, safe investment.”

With a population of about 140,000 people, one-third of them students and 20 per cent working in the technology industry, Waterloo has been billed as Canada’s Silicon Valley. Home to BlackBerry Ltd., Open Text Corp., and dozens of startups, Waterloo and neighbouring Kitchener are so in-demand that condo development is surging.

Wekerle, who made millions trading Canadian oil and mining stocks before turning to tech, recently bought six buildings there formerly owned by BlackBerry. He’s currently negotiating the purchase of another three buildings in the region.

“It’s like lightning in a bottle — you could try this in a hundred different places and never achieve the same type of community as what has been created” in Kitchener-Waterloo, Sam Sebastian, country manager for Google Canada, said in statement earlier this month after opening Google’s new offices in the Breithaupt Block development in Kitchener.

NKL Properties Inc., the closely held developer of District Condos, guarantees the investor as much as $1,930 per month on units for the first two years. Units in the building range in price from $270,000 one-bedroom suites to two-bedroom units for about $340,000. Toronto-based FirstService Corp., whose shares have risen 90 per cent over the past 12 months, will manage the property.

Nora Gharib, who recently graduated from the University of Waterloo’s pharmacy program and now lives in Toronto, is considering buying a unit in the District building. “I regret not investing in a condo there when I was in school,” said the 28-year-old, who remembers driving 10 minutes to get a coffee at one of the only Starbucks cafés in town. Today, there are a dozen in the area.

“You couldn’t walk there at night before — not even because it was dangerous but because it was just dark and there wasn’t anything there,” she said, while looking at a unit layout at the event. “Then buildings went up and more young people moved in. It was like watching an area blossom. It’s the new Waterloo.”

The vacancy rate on a bachelor unit in the Kitchener-Waterloo area was 1.5 per cent in October 2015, a 13-year low, according to data from Canada Mortgage & Housing Corp. That compares with 1.9 per cent for the same type of unit in Toronto. District Condos is one of 14 condo towers under construction or planned in the region over the next few years, according to real estate-data tracker BuzzBuzzHome.com.

General housing market activity has also been buoyant with average prices rising 23 per cent to $346,150 in the last five years to August, according to the Canadian Real Estate Association. That’s behind the 42 per cent growth in Toronto, where the average home price is $573,500.

The rise in prices and condo development, against a record ratio of Canadian household debt to disposable income, has raised concerns of a real estate bust is brewing across the country.

Deep Sachdev, a mortgage agent in Toronto, decided against buying a unit in the District Condos project at the event. He and his wife, who already own seven units across Kitchener-Waterloo and a handful in other cities, said prices for pre-construction units are rising at about 10 per cent each year, making the returns less compelling.

“The time to get in was two years ago,” Sachdev said. “There’s the potential for oversupply if they keep building at this pace, which won’t help rents or prices.”

Construction on the District Condos tower, a few minutes walk from Wilfrid Laurier University as well as UW, and which will include a yoga studio and coffee bar, starts later this year and is slated for occupancy at the start of the 2018 school year.