TORONTO — A dovish tone in the latest statement from the U.S. Federal Reserve sent Toronto and New York stock markets higher Wednesday, as the central bank decided to hold its key interest rate unchanged amid an uncertain global economy. 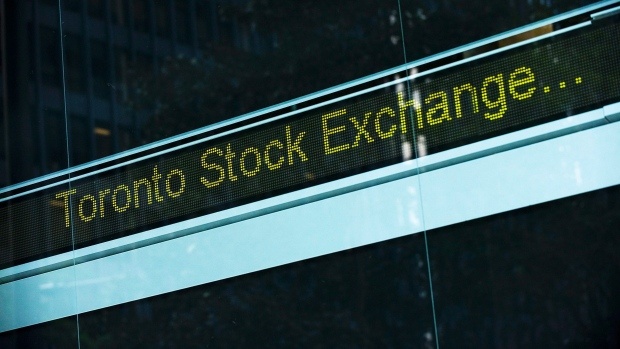 A Toronto Stock Exchange ticker is seen at The Exchange Tower. (The Canadian Press/Aaron Vincent Elkaim)

The loonie spiked against a weakening greenback, gaining 1.37 U.S. cents to 76.21 cents US.

In a statement after its two-day policy meeting, the Fed said the U.S. economy has shown signs of moderate growth but that it is still concerned about global economic risk.

As a result, Fed officials now expect to raise interest rates two times this year instead of four. Most economists don’t expect the first hike to occur until at least June.

Since raising its key rate from a record low in December, the Fed has held off on raising rates again.

In a nod to the financial market turbulence that hit in the beginning of the year over concerns about falling oil prices and weakness in China, the Fed statement said: “Global economic and financial developments continue to pose risks.”

It noted that inflation has “picked up in recent months” but remained below the Fed’s desired two per cent target.

Craig Jerusalim, a portfolio manager at CIBC Asset Management, says the risk with resuming rate hikes too quickly is that it will slow growth in the U.S., which can eventually lead to a global recession. Alternatively, the risks with waiting too long is that inflation can ramp up more quickly than people expect.

In the meantime, stock markets will continue to stay buoyed as long as interest rates remain low.

“It sure does help stock markets,” he said. “Companies are able to borrow money and invest in their businesses, make acquisitions, buy back shares, all which are stimulative for stock prices. There’s also the alternative factor. If you’re not being paid to save money, you’re going to go out and invest.”

On commodity markets, the April gold contract closed $1.20 lower at US$1,229.80 a troy ounce, but after-market trading saw bullion soar as much as US$33 an ounce.

Commodities, which are priced in U.S. dollars, are typically seen as more attractive to holders of other currencies when the American dollar falls in value.

Stock markets, dollar soar after U.S. Federal Reserve announcement2016-03-172020-06-19https://www.mortgagekw.com/wp-content/uploads/2018/01/logo-1.pngMortgage Centre KWhttps://www.mortgagekw.com/wp-content/uploads/2018/01/logo-1.png200px200px
About
mortgagecentrekw
Formed in 1989, The Mortgage Centre was Canada’s first national mortgage broker organization. As your local, licensed mortgage broker, The Mortgage Centre KW is fully-qualified to provide you with a range of unique benefits.