Canadians are calling for a collaborative, strong and innovative national housing strategy to eliminate homelessness across the country. 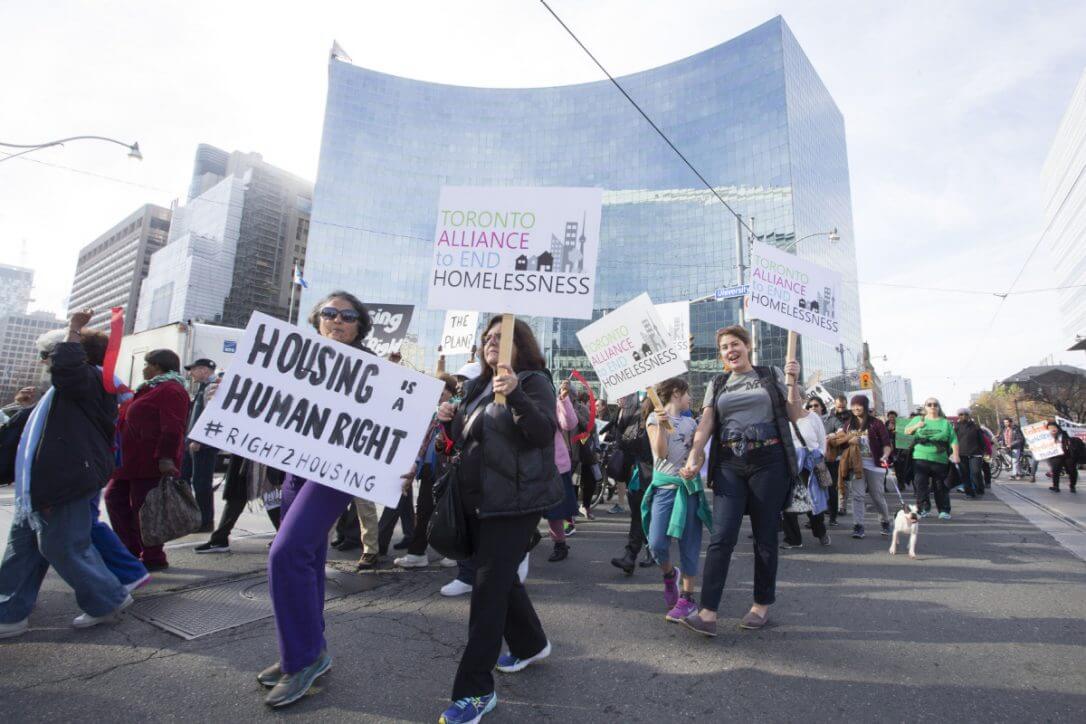 Protesters march from Queen’s Park in support of the National Housing Day of Action on Nov. 18, 2016.  (Bernard Weil / Toronto Star) | Order this photo

Those were some of the key themes identified through a four-month-long, countrywide consultation and summarized in a report released on Tuesday, entitled What We Heard: Shaping Canada’s National Housing Strategy.

“Canada needs a National Housing Strategy as a vehicle for social inclusion,” Minister Jean-Yves Duclos said in a written statement in the report. “Affordable housing can connect individuals with the facilities and services they need to build secure, productive and meaningful lives for themselves,” said Duclos, Minister of Families, Children and Social Development.

Close to 7,000 Canadians weighed in through focus groups, surveys, reports, and written opinions. The government pledged to use all input to develop the recommendations for the final strategy, expected to be released in early 2017 and to continue consultations with indigenous communities to make sure housing needs are met in cities, as well as in remote locations and on reserve.

The report was released on National Housing Day, an annual event created after the Toronto Disaster Relief Committee declared homelessness was a national disaster, in 1998.

Today at noon, advocates, politicians and people who have experienced homelessness will gather at the Church of the Holy Trinity, to speak to the need for a strong national strategy and remember the men and women who died in Toronto because of homelessness. City of Toronto numbers document 217 deaths between 2015 and 2007, but those figures do not count people outside the shelter system.

The high cost of housing in Canada largest cities, was also identified as a top concern, as was building a stronger affordable housing sector, social housing renewal and more access to subsidized housing, potentially through the development of a national housing benefit or income support program.

The authors of the federal report stated there would be hard work ahead, as all parties involved worked to find ways to use “finite government funds to maximum effect” across the country.

“Needless to say, broad consultations indulge people’s expectations, as they should. However, policy-makers must balance these against fiscal constraints,” wrote the authors.

Across the country, agencies long invested in affordable housing have been strategizing to ensure any available funding is utilized in the most meaningful way.

Michelle German, senior project manager at Evergreen CityWorks and co-ordinator for the GTA Housing Action Lab, said on Monday more than 80 stakeholders — including developers, architects, along with members of municipal government, the financial industry and the private and public housing sector — met in Toronto to continue mapping out next steps.

“People in the housing sector have really gotten to a place where they realize we are stronger together, German said. “We are trying to address way more than housing.”

By Emily MathieuInvestigative News reporter
Report on Canada’s national housing strategy released2016-11-232020-06-19https://www.mortgagekw.com/wp-content/uploads/2018/01/logo-1.pngMortgage Centre KWhttps://www.mortgagekw.com/wp-content/uploads/2018/01/logo-1.png200px200px
About
mortgagecentrekw
Formed in 1989, The Mortgage Centre was Canada’s first national mortgage broker organization. As your local, licensed mortgage broker, The Mortgage Centre KW is fully-qualified to provide you with a range of unique benefits.