This is great news and will hopefully more than offset some of the additional CMHC premiums commencing March 17th.

$4,000 rebate will go a long way for a  First Time buyer in Kitchener Waterloo and will continue to keep the First Time Buyers in the market.

First-time homebuyers’ break on the land transfer tax will double under a new proposal by the Ontario government, but wealthy purchasers will pay the price once new land transfer rules come into effect Jan. 1, 2017.

Absent from changes announced Monday to land transfer fees in the country’s most populous province is any mention of an increase in the amount charged to foreign buyers, who now face an additional 15 per cent tax in Vancouver. 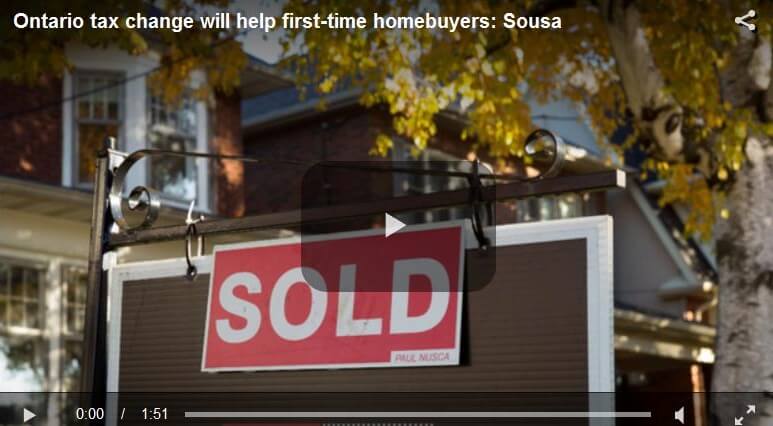 “The minister has avoided scapegoat-based politics. If you look to what his counterpart in British Columbia did it was essentially to look for groups to blame — in a nutshell, realtors and the Chinese. Here they have focused on affordability and access (to the market),” said Phil Soper, chief executive of Royal LePage Real Estate Services, one of the largest firms in the country, referring to the changes announced by Ontario Finance Minister Charles Sousa.

“You look at even in an expensive city like (Toronto), $2 million is well above the average detached home and the additional half a point only applies to amounts above $2 million. You add another million (to a purchase over $2 million) and it only amounts to $5,000,” Soper said. “This is a very different approach to what happened in British Columbia. It’s not aimed at one group.”

Soper said policymakers do not want to risk taking the steam out of the housing market, something that seems to be happening in British Columbia where sales continue to fall and were down almost 40 per cent in October, year-over-year.

For now it does look like foreign buyer have escaped the wrath of the Ontario provincial government, said Doug Porter, chief economist of Bank of Montreal.

“I would think we won’t see anything soon,” said Porter, about an Ontario foreign-buyer tax. “I wouldn’t say the issue is completely dead and buried. Obviously they don’t think it is the thing to do at the moment. They need more of a groundswell. That’s what it took in B.C. For a long time the B.C. government was not interested in doing anything that would bring down prices or threaten people who own homes.”

Benjamin Tal, deputy chief economist with CIBC, said he doesn’t think the tax changes will change much in the market.

“Clearly they don’t want to touch (foreign buyers). Let’s see what happens in the next six months. If we see significant increase in purchases, they might revisit,” Tal said. “They don’t touch it now.”

Ontario gives rebates to first-time buyers, penalizes wealthy and leaves out foreigners2017-01-182020-06-21https://www.mortgagekw.com/wp-content/uploads/2018/01/logo-1.pngMortgage Centre KWhttps://www.mortgagekw.com/wp-content/uploads/2017/01/2-1.jpg200px200px
About
mortgagecentrekw
Formed in 1989, The Mortgage Centre was Canada’s first national mortgage broker organization. As your local, licensed mortgage broker, The Mortgage Centre KW is fully-qualified to provide you with a range of unique benefits.