It’s going to get more expensive for Canadian banks to do business in the country’s housing market as the government seeks to limit its exposure to surging home prices and the risk of default. 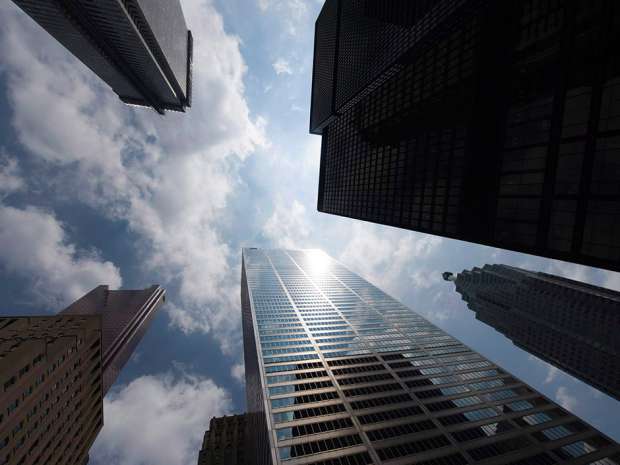 The Office of the Superintendent of Financial Institutions, which oversees federal banks and insurers, is seeking to raise the amount of capital that lenders hold to back residential mortgages, while the Canada Mortgage & Housing Corp. is increasing the cost to securitize those loans. The result will be increased standards at the banks, narrower margins, and a slowdown in the issuance of mortgages and lines of credit.

“The added capital for banks is a safety measure,” Benjamin Tal, deputy chief economist at Canadian Imperial Bank of Commerce, said. “The banks will issue fewer loans, and that will cool the market. It won’t kill it, but it will cool it.”

The Canadian government also raised downpayment requirements to cool prices which have surged an average 9.9 per cent in Toronto to $621,883 from a year ago, and by about the same amount in Vancouver to $893,864.

The eight-member Standard & Poor’s/TSX Composite commercial banks index fell 1.23 per cent at 12:52 p.m. amid broad losses in the main S&P/TSX Composite equity gauge, with Royal Bank of Canada dropping 1.4 per cent and Toronto-Dominion Bank down almost 1 per cent.

Canada’s chartered banks currently have about $1 trillion in residential mortgage credit outstanding, according to the Bank of Canada. The rules will impact loans going forward and not loans already issued, OSFI said.

“We believe these new rules could slow the pace of mortgage growth for the industry” from about six per cent which has been accelerating following Bank of Canada interest rate cuts, according to Darko Mihelic, an analyst at Royal Bank of Canada.

“In some ways, we could also view this announcement as an ‘admission’ that Canadian housing prices and mortgage underwriting standards have become more of a concern for Canadian regulatory authorities,” he said in a note to clients.

He expects the process won’t lead to a “sudden capital requirement” imposed on lenders, and sees it as a “mild negative” for the banks.

The government-backed CMHC, the country’s largest mortgage insurer, announced a number of changes to the fees it charges issuers such as banks to back their mortgage loans. For example, it’s increasing how much it charges for annual guarantees of at least $7.5 billion. The move is aimed at reducing the government’s exposure to the risk of mortgage default, said Paul Bretzlaff, a vice-president at DBRS Ltd.

A Royal Bank of Canada spokesman said the lender will review the details of the proposed changes. The country’s other major lenders didn’t immediately respond to requests seeking comment.

Mortgage growth expected to slow as Canadian banks assume more risk2015-12-182020-06-19https://www.mortgagekw.com/wp-content/uploads/2018/01/logo-1.pngMortgage Centre KWhttps://www.mortgagekw.com/wp-content/uploads/2018/01/logo-1.png200px200px
About
mortgagecentrekw
Formed in 1989, The Mortgage Centre was Canada’s first national mortgage broker organization. As your local, licensed mortgage broker, The Mortgage Centre KW is fully-qualified to provide you with a range of unique benefits.