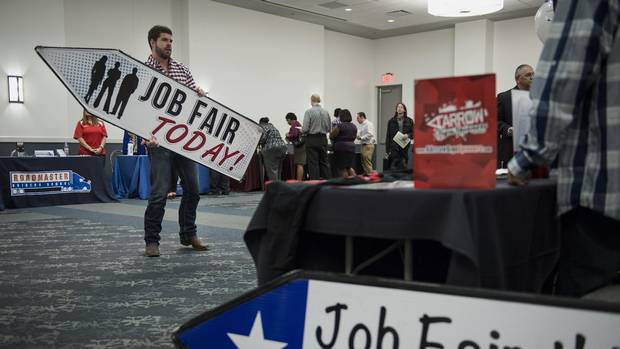 Thursday’s reports underscored the economy’s strength and supported views that the United States would weather the impact of last month’s British referendum to leave the European Union.

“The labour market does not seem to be faltering. The apparent willingness of small business owners to bring on new workers is a clear sign that the economy is moving forward solidly,” said Joel Naroff, chief economist at Naroff Economic Advisors in Holland, Pennsylvania.

The ADP report, which is jointly developed with Moody’s Analytics, was published ahead of the government’s more comprehensive employment report for June due on Friday.

Though the ADP report is not considered a reliable predictor of non-farm payrolls because of differences in methodology, economists say it, on the margin, suggested a pickup in overall employment growth.

The ADP report is not affected by strikes and therefore did not account for the return of 35,100 Verizon workers who were excluded from the non-farm payrolls count in May while on a month-long strike. Those workers are expected to boost employment in June.

“Adjusting for the strike, the ADP report suggests that the employment report’s private payroll count should be up 207,000,” said Daniel Silver, an economist at JPMorgan in New York.

“That said, the ADP and the government’s employment data do not always align very well.”

According to a Reuters survey, payrolls likely increased 175,000 last month. Employment increased by only 38,000 jobs in May, the smallest gain since September 2010.

May’s weak job gains and the pending Brexit referendum prompted the Federal Reserve to keep interest rates unchanged last month. Even if payrolls rebound in June, economists say the stunning Brexit vote made it unlikely that the U.S. central bank would hike rates before the end of the year.

Minutes of the Fed’s June 14-15 meeting published on Wednesday showed U.S. central bank officials “agreed that … it was prudent to wait for additional data on the consequences of the UK vote.” The Fed raised its benchmark overnight interest rate in December for the first time in nearly a decade.

The upbeat labour market data helped to lift U.S. stocks. The dollar was little changed against a basket of currencies, while prices for U.S. Treasuries fell.

In a separate report, the Labor Department said initial claims for state unemployment benefits declined 16,000 to a seasonally adjusted 254,000 for the week ended July 2.

The drop left claims close to a 43-year low of 248,000 touched in mid-April. Economists polled by Reuters had forecast initial claims rising to 270,000 in the latest week.

Claims have now been below 300,000, a threshold associated with a healthy labour market, for 70 straight weeks, the longest stretch since 1973. The four-week moving average of claims, considered a better measure of labour market trends as it irons out week-to-week volatility, fell 2,500 to 264,750 last week. Claims were low through June, backing views that May’s weak payroll gains were not a true reflection of the labour market.

While a third report from global outplacement consultancy Challenger, Gray & Christmas showed planned job cuts by U.S.-based employers rose to 38,536 last month from 30,157 in May, layoffs remained well below their 12-month average.

“The pace of job cutting has slowed significantly since the beginning of the year. We may continue to see low job cut totals throughout the remainder of 2016, as employers take a wait-and-see stance on work force levels,” said John Challenger, chief executive officer at Challenger, Gray & Christmas.