Home sales in Kitchener and Waterloo set record in August

KITCHENER — Homes sales were as hot as the weather in Kitchener and Waterloo last month, as real estate agents handled a record number of transactions. 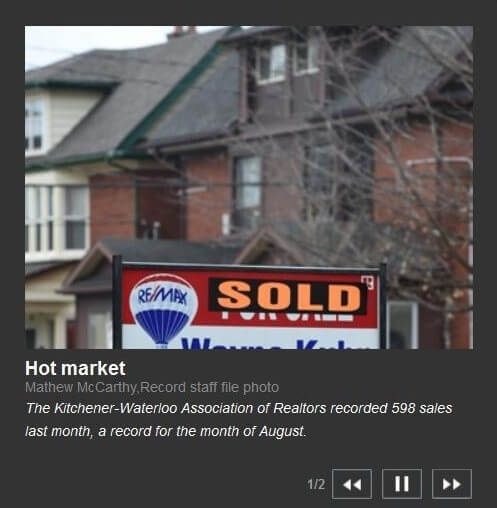 The Kitchener-Waterloo Association of Realtors recorded 598 sales, the highest total ever for the month of August.

Sales in the first eight months of the year totalled 4,703, a record for the period and 23.5 per cent above the five-year average.

“We saw strong residential activity this summer season and with record setting year-to-date sales it’s clear that buyers remain confident about the value of homes in Kitchener-Waterloo,” Charlotte Zawada, the association’s president, said Wednesday in a news release.

In the midst of the hot market, the choice for home buyers continues to be limited.

“It wasn’t just temperatures heating up in August,” said Zawada. “We’re still experiencing tight market conditions in terms of available homes for sale and this continues to push home prices in the region upward.”

By Record staff
View article here>>
Home sales in Kitchener and Waterloo set record in August2016-09-082020-06-19https://www.mortgagekw.com/wp-content/uploads/2018/01/logo-1.pngMortgage Centre KWhttps://www.mortgagekw.com/wp-content/uploads/2018/01/logo-1.png200px200px
About
mortgagecentrekw
Formed in 1989, The Mortgage Centre was Canada’s first national mortgage broker organization. As your local, licensed mortgage broker, The Mortgage Centre KW is fully-qualified to provide you with a range of unique benefits.