The Federal Reserve kept U.S. interest rates unchanged on Wednesday and signaled it still planned two hikes this year, although a slowing economic growth path for 2016 and 2017 prompted a downgrade in where the U.S. central bank thought rates would peak. 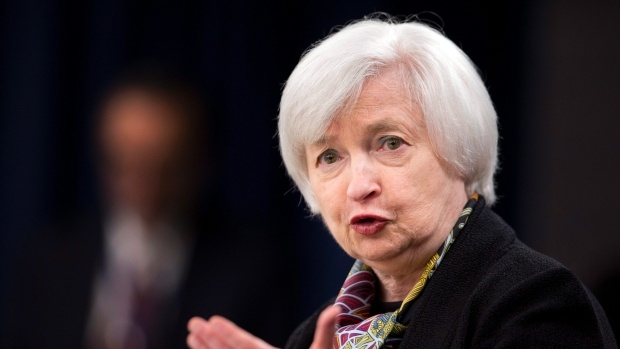 Federal Reserve chair Janet Yellen on Wednesday refused to rule out the option of hiking a key short-term interest rate at the Fed’s next meeting on July 26 and 27. (Manuel Balce Ceneta/Associated Press)

Even this year’s rates projection was less secure than previously, however. Six of the Fed’s 17 individual forecasts from governors and regional Fed presidents projected just one hike this year, compared with one such outlook when the forecasts were last issued three months ago.

“We are quite uncertain about where rates are heading in the longer term,” Fed Chair Janet Yellen told a news conference after the rate decision.

It also cut its longer term view of the appropriate federal funds rate by a quarter point to 3 per cent and indicated it would be less aggressive in tightening monetary policy after the end of this year.

Yellen gave no clues as to whether a rate hike could come as early as the Fed’s next rate-setting meeting in July, or whether the central bank would wait for a slew of firmer data as it headed into its September meeting. Markets have all but priced out any rate rise in 2016.

“While the recent labor market data have on balance been disappointing, it’s important not to overreact to one or two monthly readings,” she said, adding the Fed expected jobs to strengthen further.

Policymakers have been worried about potential weakness in the U.S. labour market and the possibility of financial turmoil if Britain votes next week to leave the European Union.

Yellen acknowledged “Brexit” was one of the factors in Wednesday’s rate decision and said Britain’s decision whether to remain or leave the European Union would have “consequences for economic and financial conditions in global financial markets”.

Financial markets all but priced out a rate increase this year after the Fed statement, and U.S. short-term interest rate futures contracts rose. U.S. stocks held on to their pre-meeting gains.

Even steady Fed hawks backed away from pushing for a hike at Wednesday’s meeting, analysts noted.

“It’s as dovish as the Fed can get without actually cutting rates. Even (Kansas City Fed President) Esther George withdrew her dissent. The path of rates is lower, which is a big dovish swing,” said Brian Jacobsen, chief portfolio strategist at Wells Fargo Fund Management.

The Fed has implemented just one rate rise in a decade and its target range for overnight lending rates between banks remained between 0.25 percent to 0.50 percent.

It raised rates in December and initially signaled four increases were likely for 2016. Concerns about a global economic slowdown and volatility in financial markets subsequently reduced that number to two.

Although worries about the health of the global economy have eased, a sharp slowdown in U.S. hiring in May was unsettling. More recent data have indicated that last month’s jobs report may have been a blip.

The Fed statement said economic activity appeared to have picked up since April.