The Bank of Canada kept its benchmark interest rate unchanged as expected today, as the central bank will wait and see what Ottawa plans to spend on stimulating the economy in its forthcoming federal budget before taking any further action.. 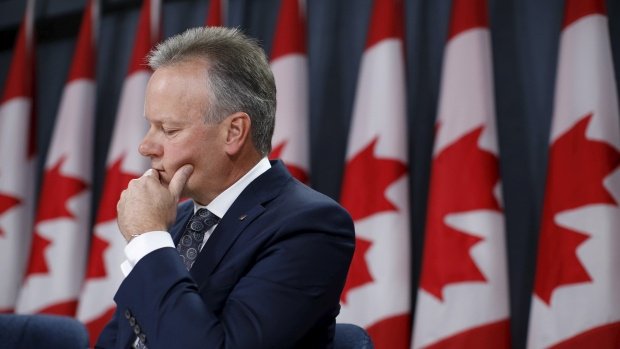 Bank of Canada governor Stephen Poloz said the bank’s forecast for the economy could be hiked based on how much money the federal government plans to spend on infrastructure. (Chris Wattie/Reuters)

The central bank kept its benchmark target for the overnight rate steady at 0.5 per cent, saying in a statement “the near-term outlook for the economy remains broadly the same as in January.”

The rate has a big impact on consumers and businesses because it affects the cost of borrowing, and the rate of return that savers get on their capital.

The bank cut its benchmark rate twice last year in an attempt to stimulate a Canadian economy that had been waylaid by tanking oil prices. When the bank revealed its quarterly monetary policy report in January, the central bank lowered its economic growth projection for this year to 1.4 per cent from two per cent.

Bank of Canada governor Stephen Poloz said at the time that any fiscal measures contained in the federal budget — which is set to be unveiled at the end of the month — could bump that forecast.

Based on its statement Wednesday, it’s clear the bank is OK to wait on the sidelines to see what the government has up its sleeve before choosing to tinker with lending rates again.

Its statement Wednesday said as much: “An assessment of the impact of the upcoming federal budget’s fiscal measures will be incorporated into the Bank’s April projection.” 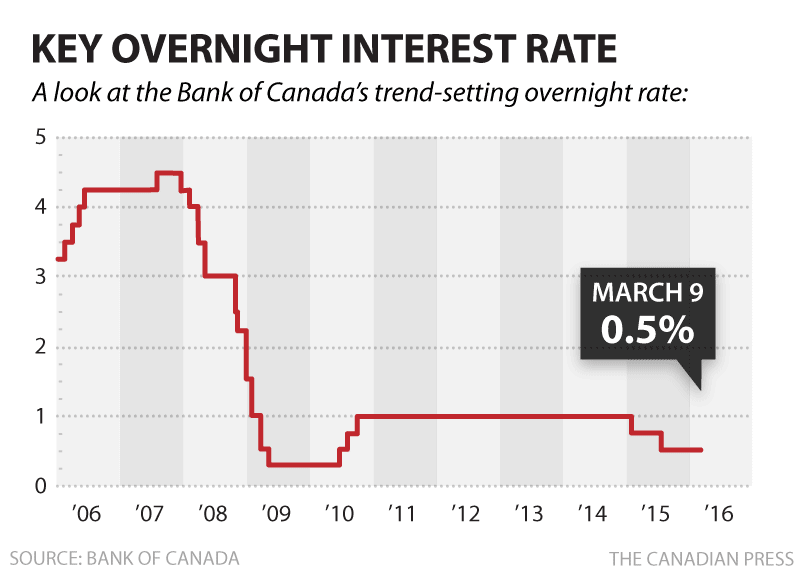 While the decision to do nothing was what all 25 economists who cover the bank were expecting, at least one thinks it’s very possible the bank might cut its rate to near zero some time later this year — especially since the Canadian dollar’s mini-rally to 75 cents removes the loonie as an obstacle to more cuts.

“Fiscal stimulus from Ottawa is no miracle growth cure for the economy, and any relapse in oil prices will simply expose the underlying soggy growth outlook,” BMO’s Doug Porter said. “The scalding housing market in some cities would be a good reason for the bank to stay put, but they seem to have washed their collective hands on that front.”

David Madani of Capital economics agrees, saying in a note “we still think that a rate cut next month, to 0.25 per cent, is a distinct possibility.”

The Canadian dollar reacted positively to the news: after being slightly lower ahead of the decision, the loonie gained more than a penny to trade at 75.59 cents US shortly after. A surprise cut would have sent the dollar tumbling.

Bank of Canada keeps key interest rate at 0.5%2016-03-102020-06-19https://www.mortgagekw.com/wp-content/uploads/2018/01/logo-1.pngMortgage Centre KWhttps://www.mortgagekw.com/wp-content/uploads/2018/01/logo-1.png200px200px
About
mortgagecentrekw
Formed in 1989, The Mortgage Centre was Canada’s first national mortgage broker organization. As your local, licensed mortgage broker, The Mortgage Centre KW is fully-qualified to provide you with a range of unique benefits.

Privacy Policy | Sitemap    Designed by Intrigue Media. Additional accessible formats for this information are available upon request. Contact Us for more information.
Copyright © The Mortgage Centre KW. All Rights Reserved. Brokerage Licence #10828. Each Mortgage Centre Office is independently owned and operated.
Social Media Auto Publish Powered By : XYZScripts.com
What a $1 million home looks like in Canada this weekBlog, Uncategorized
How to cut your U.S. dollar exchange costs: MayersBlog, Uncategorized