The Bank of Canada has decided to keep its trend-setting interest rate steady at 0.5 per cent on Wednesday.

The central bank, led by governor Stephen Poloz, elected to neither raise nor lower its target for the overnight rate, citing “significant uncertainties” weighing on the outlook for Canada’s economy. 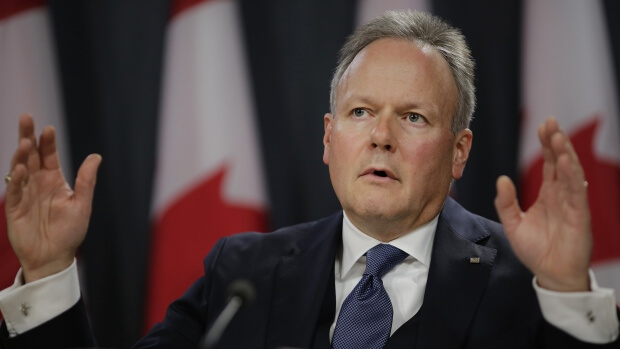 The Bank of Canada, led by governor Stephen Poloz, kept its benchmark interest rate right where it is on Wednesday. (David Kawai/Bloomberg)

Statistics Canada recently revealed the inflation rate jumped to 2.1 per cent in January, news that ordinarily perhaps would have compelled the Bank of Canada to raise interest rates to cool things down.

But the central bank made it clear in its statement Wednesday that outside of higher energy prices sparked by carbon taxes in two provinces, the actual cost of living is going up at a much lower rate than that.

“The bank is looking through these effects, as their impact on inflation will be temporary,” the bank said.

The central bank’s rate has an impact on the rates consumers are offered from retail banks on variable-rate products like savings accounts, lines of credit and mortgages. 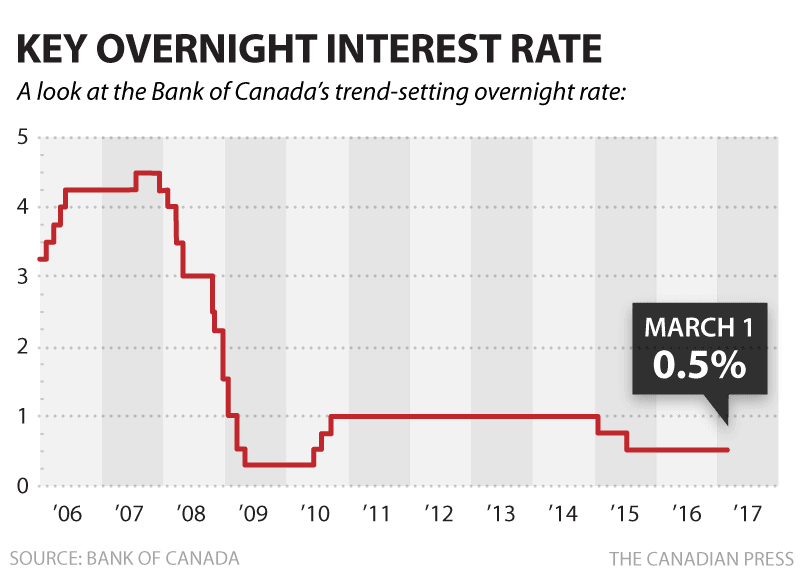 The bank noted a gap opening up between the U.S. and Canadian economies, as the U.S. is showing clear signs of heating up, while Canada is stumbling a little. Normally the two countries have monetary policy that moves in lockstep, and when they don’t that’s known as “divergence” — a situation that often has unexpected consequences.

“The bank, for all intents and purposes is hamstrung,” Don Curren with foreign exchange firm Cambridge Global Payments said. “The factors it needs to fall into place for stronger growth in Canada are essentially beyond its control.”

“Given that difficult and uncertain environment, the Bank is not likely to cut interest rates or move them higher any time soon,” Curren said.

That’s the consensus view among economists, including TD Bank’s Brian DePratto, who expects the bank to keep rates low to stimulate the economy for a while yet.

“Today’s statement provides further confirmation of our view that the Bank of Canada will not be taking its foot off the accelerator,” he said. “Over the near term, given the still significant economic uncertainties, particularly beyond Canada’s borders, we continue to see the risks to monetary policy as tilted towards further easing.”